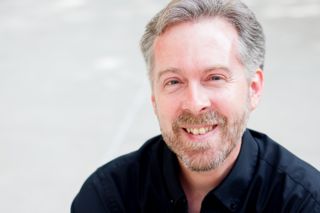 Conductor and composer David Kidwell has been Music Director and Conductor of the Holyoke Civic Symphony since 1997, serving longer than any other conductor in the orchestra’s history.

Under his leadership the orchestra has grown both in size and in ability. He has expanded the orchestra’s commitment to education with educational concerts, pre-concert talks, and open dress rehearsals. And he has reinforced the orchestra’s commitment to new music by commissioning nine new works and performing nearly fifty pieces by living American composers. Kidwell received the prestigious University of Mary Washington Young Alumnus Merit Award in 2004, and Holyoke mayor Alex Morse declared February 25, 2012, to be “David Kidwell Day.” Holyoke mayor Joshua Garcia repeated the honor on May 1, 2022. In 2011, Kidwell stepped down after 15 years as conductor of the Guilford Festival Orchestra in Vermont, an ensemble known for its performances of both contemporary music and chamber orchestra repertoire.

Kidwell was also Minister of Music at the Edwards Church of Northampton for 22 years, leading one of the most accomplished church music programs in Western Massachusetts.

Kidwell is an active composer whose works have been performed throughout the United States. Music critic Clifton J. Noble wrote, “The ways he manipulates the melody, his unerring harmonic sense and perceptive scoring speak with the honest originality that is the hallmark of America’s most revered composers.” He has previously been commissioned by the Litchfield County Children’s Chorus (CT), Fairborn St. Luke United Methodist Church (OH), Bowling Green Baptist Church (VA), the Amandala Women’s Chorus (CT), the Eagle Pipe Band (VA), the University of Mary Washington (VA), the Edwards Church of Northampton, and the Holyoke Civic Symphony. Kidwell’s music has been published by Micropress, Lorenz, and MMB Music.

David Kidwell was raised in a music-loving family in Virginia, where he played piano, organ, trumpet, and violin. After musical studies in Virginia and Connecticut, he moved to the Pioneer Valley of Massachusetts. He was music director and pianist for the Broadway-style revue Le Cabaret for six years and assistant conductor of the Pioneer Valley Symphony for five years. Kidwell has music directed over fifty musical and light opera productions by community theatre groups, and he has been a substitute keyboardist at the Goodspeed Opera House. In 2004 he was music director for the Amherst Leisure Services production of The Secret Garden, which won first prize in the International Maytime Festival in Dundalk, Ireland.

David Kidwell holds a bachelor’s degree in music from the University of Mary Washington and a master’s degree in composition from The Hartt School. He has studied conducting at the Tanglewood Music Center, the Conductors Institute of South Carolina, and privately with Melvin Strauss. In 2011 he was a participant in the Music Direction Intensive program at the Goodspeed Opera House. Kidwell is a member of Phi Beta Kappa, Broadcast Music International, the Conductors Guild, the American Guild of Organists, and the League of American Orchestras, and the American Federation of Musicians locals 171 (Springfield), 400 (Harford/New Haven), and 802 (New York City).

For more information, or to purchase or listen to David Kidwell’s compositions, please visit his website at www.davidkidwell.net.