Home (of course!) for the Holidays

As the familiar song observes, “There’s no place like home for the holidays.” This afternoon the Holyoke Civic Symphony welcomes the opportunity to transmit our virtual holiday concert directly to your homes. A special highlight will be the performance by violinist Hannah Adler, who is the winner of our 2020 Student Concerto Competition. She will be accompanied on the piano by Tamila Azadaliyeva. In addition, this joyous program will feature the HCS String Quartet and Quintet playing beloved Christmas and Hanukkah songs, solos by other orchestra members, a rendition of Clement Moore’s “A Visit from St. Nicholas,” and two full-orchestra encore selections chosen from our video archive.

WILLIAM ZINN was a member of many major orchestras and composed or arranged over 500 chamber ensembles including the arrangements of the Christmas carols that the HCS String Quintet will play today.

The Italian musician ENNIO MORRICONE is widely considered one of the most prolific and greatest film composers of all times. His short melody, Gabriel’s Oboe, was the theme for the 1986 movie The Mission with Robert de Niro, Jeremy Irons, Liam Neeson. It was directed by Roland Joffé and takes place in 16th century Paraguay. In the film, the Jesuit protagonist, Father Gabriel, walks up to a waterfall and starts playing his oboe, aiming to befriend the Guaraní natives with his music so that he can carry on his missionary work in the New World. Several orchestras have performed this haunting piece often under the direction of Morricone himself.

PABLO CASALS was a Catalan cellist, composer, and conductor. He is generally regarded as the preeminent cellist of the first half of the 20th century and one of the greatest cellists of all time. Although he made many recordings throughout his career of solo, chamber, and orchestral music, he is best remembered for his performance of the Bach cello suites recorded from 1936 to 1939. Throughout his life, Casals struggled constantly for peace, justice, and freedom. In recognition of his stance, in 1971, U Thant, Secretary-General of the United Nations, honored him with the U.N. Peace Medal. Casals expressed his gratitude with a very moving speech and by playing as an encore a Catalan folksong melody, Song of the Birds. He explained, “Birds sing when they are in the sky. They sing: ‘Peace, peace, peace,’ and it is a melody that Bach, Beethoven, and all the greats would have admired and loved. What is more, it is born in the soul of my people, Catalonia.”

FELIX MENDELSSOHN was a German composer, pianist, organist, and conductor of early romantic music. The Violin Concerto was his last large orchestral work. He first thought about it in 1838 when he wrote to his friend, the distinguished German violinist Ferdinand David, to say “I’d like to write a violin concerto for you next winter; one in E minor sticks in my head, the beginning of which will not leave me in peace.” The result, which was not completed until 1844, has become one of the most popular and frequently performed violin concertos in history.

The first movement opens with the almost immediate entry of the solo violin playing the very tune in E minor that gave Mendelssohn no peace. Following a bravura of rapidly ascending notes, this theme is then restated by the orchestra. Next comes a frenetic chromatic transition passage as the music subsides and modulates into a tranquil second subject theme in G major The opening two themes are then combined in the development section where the music builds up to the innovative cadenza, which Mendelssohn wrote out in full rather than allowing the soloist to improvise. Even after listening to just the first of the three movements, one can readily understand why critics regard the concerto as a “powerhouse finale” to Mendelssohn’s spectacular career.

Hannah Adler, the winner of our 2020 Student Concerto Competition, is a senior at Loomis Chaffee School in Windsor, CT. She studies violin with Rebecca Fischer in New York City, where she is also the principal second violin of the New York Youth Symphony. An avid chamber musician, Hannah looks forward to spending her summers at Greenwood Music Camp in Cummington, MA. When she’s not playing the violin, she enjoys running on the cross-country team and hiking near her hometown in Western Mass.

Tamila Azadaliyeva was born in Uzbekistan where she received her early musical training. In the United States she studied at the University of Hartford’s Hartt School, receiving her Master’s degree while studying with Luiz de Moura Castro. Tamila has performed as a soloist and chamber musician in the United States, Italy, Spain, Uzbekistan, and Kazakhstan. An avid chamber musician, she has recorded with her partner, cellist Peter Dzialo, on the LPR label.

Two favorite songs of Hanukkah arranged by YOEL EPSTEIN who teaches violin and viola in Israeli conservatories, public and Waldorf schools, and privately. He is the author of Playing Together, the leading book on teaching violin in classes.

In 1943 Bing Crosby recorded “I’ll Be Home For Christmas,” written by lyricist Kim Gannon and composer WALTER KENT, to honor soldiers stationed overseas during World War II. Eleven years later, Perry Como recorded “Home for the Holidays,” composed by ROBERT ALLEN with lyrics by Al Stillman in 1954. Both songs were instantly popular and have since become Christmas classics.

“A Visit from St. Nicholas,” also known as “Twas the Night Before Christmas,” is a classic Christmas poem by CLEMENT CLARKE MOORE and was first published anonymously in 1827. The author was a writer and American Professor of Oriental and Greek Literature at the General Theological Seminary of the Protestant Episcopal Church in New York City. The poem has been called “the best-known verses ever written by an American,” but it was not attributed to Moore until 1937. Certainly, for generations ever since, it has continued to describe the characteristics of Santa Claus’s visits to houses on Christmas Eve.

Christmas Eve/Sarajevo 12/24 is a song that was written 1995 by Robert Kinkel and Paul O’Neill, both members of Savatage, an American heavy metal rock band, but it did not become well known until it was recorded by the Trans-Siberian Orchestra (TSO) and released a year later. The song tells the story of Sarajevo-born cellist Vedran Samilovic who returns to his homeland to find it in ruins after the Bosnian War. At that time Serbs were shelling Sarajevo every night. Rather than heading for the bomb shelter to join his family, Samilovic went instead to the town square. He climbed onto a pile of rubble that had once been a fountain, took out his cello, and played Mozart, Beethoven, and Christmas carols as the city was bombed. The TSO created an instrumental medley of Carol of the Bells and God Rest you Merry, Gentlemen to fit this story. On the original recording, the orchestra represents one side, the rock band the other, and a single cello represents Samilovic, as a spark of hope. As arranged by BOB PHILLIPS, the piece reflects the drama of a single musician in the midst of war and the power of music to bring hope.

Mel Tormé, a.k.a “the Velvet Fog,” and once known as “the epitome of the lounge singer,” wrote over 300 songs during his career, but “The Christmas Song” that he composed on a hot summer day in 1944 is the only one that survives as a classic. Recorded by the Nat King Cole Trio, it was released in November 1946. It became an immediate best seller for Cole, who devised a newer rendition with each change in recording technology. Composer, music educator, and conductor BOB LOWDEN wrote the orchestra arrangement that we play for you today. 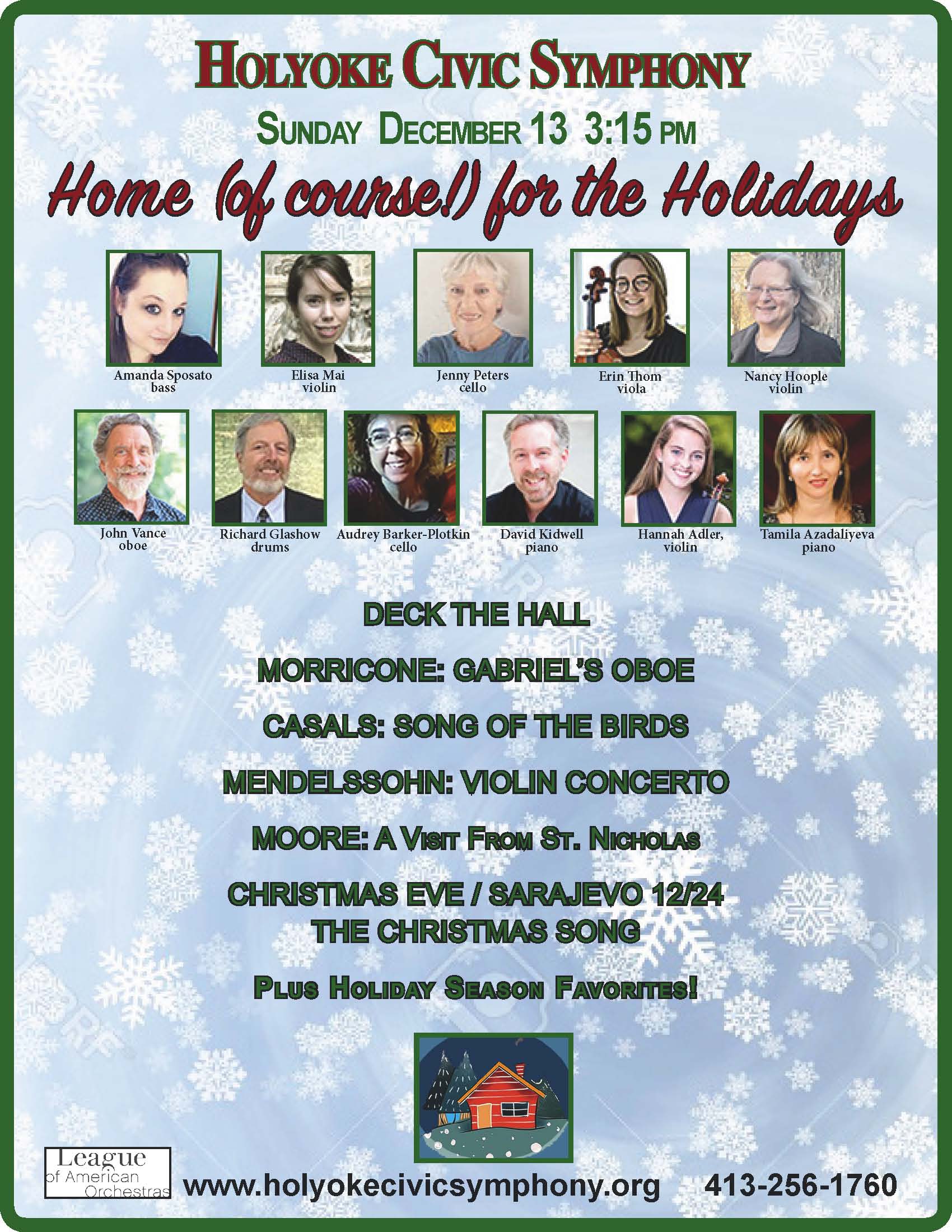