The 54th season of the Holyoke Civic Symphony takes place within a world beset by a mysterious and frightening pandemic. Although this situation eliminates the possibility of presenting our usual series of orchestra concerts at Holyoke Community College, it opens up an exciting opportunity for highlighting the various instrumental sections that make up the orchestra. Today, for example, we feature, as well as the full orchestra, representatives of the string and woodwind sections, the piano (an orchestra in itself!), and a soprano vocalist.

French oboist, organist, teacher, and composer CHARLES COLIN began his musical studies with his father, who directed a French Military band. He went on to study oboe, organ, and composition at the Paris Conservatory where he won many prizes. He was a candidate for the Prix de Rome in 1857, coming in second behind Georges Bizet, who won with his cantata, Clovis and Clothilde. In 1868, Colin became the oboe teacher at the Paris Conservatory, and he was also the titular organist of the Church of Saint-Denys-du-Saint-Sacrement in Paris.

Colin had a successful musical career, and his wealth of experience led to the compilation of Famous Solos for Competitions. The challenging solo from this collection, played by HCS principal oboist Jodie Hoye and accompanied by David Kidwell, addresses many technicalities, including complex rhythms, a range of articulation, and variations in dynamics, time signatures and ornamentation. In choosing this piece to perform, Hoye adds: “Colin clearly knew the instrument he was writing for, capturing all the attitudes of the oboe: warm, playful, curious, and obtuse.”

LUDWIG VAN BEETHOVEN wrote 32 piano sonatas between 1795 and 1822, and taken together, they provide a bridge between the worlds of the salon and the concert hall. His first sonatas were highly influenced by those of Haydn and Mozart. Like theirs, they were gracious and elegant in style, but Beethoven’s Sonata No. 2, published in 1795 and dedicated to Haydn, also broke new ground. In the opinion of British music critic David Tovey, “The second sonata is flawless in execution and entirely beyond the range of Haydn and Mozart in harmonic and dramatic thought.” HCS conductor David Kidwell has chosen to play the second movement, which features a high degree of contrapuntal thinking and a staccato, pizzicato-like bass against lyrical chords.

In his short life, WOLFGANG AMADEUS MOZART completed 26 string quartets, the first at the age of 14 and the last in June 1790, the year before his death. The D Major quartet (sometimes nicknamed “the Violet”) was the first of a proposed set of six quartets written for and dedicated to the King of Prussia, Friedrich Wilhelm II, an amateur cellist. Written in a style similar to the quartets of Joseph Haydn, it is a popular piece in the repertoire today.

The Allegretto in D major is the first of four movements. It opens tenderly, and after only eight bars we have already heard the two basic kinds of music in the movement: smooth, buoyant, rising arpeggios and clever, articulate falling scales. The interaction between these two elements is the main story here, playing out against textures that are luminous, patient, and often mesmerizing. If the chamber music of this period is often conversational in nature, then this movement is a standout in that regard, featuring a patient pace of exchange between the instruments that evokes, to an unusual degree, a feeling of real-life conversation among four people, with every voice given room to have its say.

Schindler’s List is a 1993 American epic historical period drama film, directed and co-produced by Steven Spielberg and scripted by Steven Zaillian. It is based on the novel, Schindler’s Ark by Thomas Keneally, which tells the story of Oskar Schindler, an ethnic German businessman who saved the lives of more than a thousand mostly Polish-Jewish refugees during the Holocaust by employing them in his factories. JOHN WILLIAMS won an unprecedented fifth Oscar for the score that he composed to accompany the film. Violinist Christine Singer, accompanied by David Kidwell on the piano, plays the haunting theme from Williams’s exquisite score.

One of my projects during the pandemic has been to start composing a song cycle of Emily Dickinson poems. It occurred to me that Dickinson was the original social distancer, so I went through all of her poems looking for themes of being at home. I settled on six poems, and so far I have completed two of them. “These are the days when Birds come back,” is a wistful poem about saying goodbye to summer, and “Some keep the Sabbath going to church” shows Dickinson’s predilection for finding religious experiences in nature. I plan to orchestrate the song cycle for a future Holyoke Civic Symphony concert.

ANTONÍN DVOŘÁK composed nine symphonies. Of these, the Symphony No. 9 (“From the New World”) is probably the best known, but many critics regard his Symphony No. 8 in G major as his greatest. The Eighth is cheery and lyrical, drawing inspiration from the Bohemian folk music that Dvořák loved. A brilliant trumpet fanfare announces the final movement, Allegro ma non troppo. The cellos introduce the main theme in the home key of G. The movement is in variation form, but with the structural innovation that the theme and second variations recur as they would do in a rondeau. The first variation is a tentative elaboration of the theme, but the second is wildly exuberant with thrilling trills from the horns. The following variations create a range of mood. In the end, however, it is the lively second variation that returns and is extended into a coda of vibrant energy. 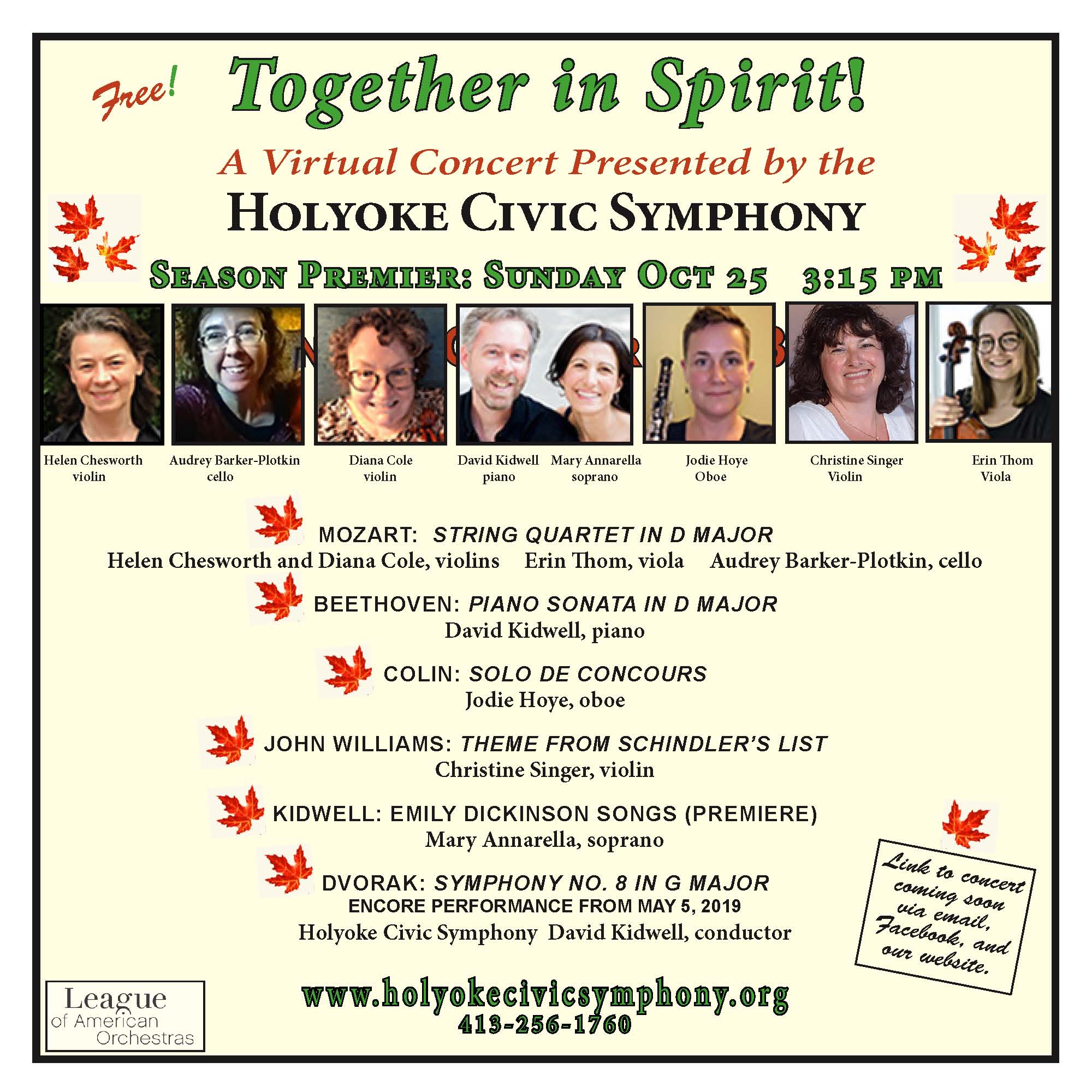