Beethoven at 251: A Birthday Celebration

Ludwig van Beethoven was born on December 17, 1770, and like other orchestras around the world, the Holyoke Civic Symphony looked forward to celebrating his 250th anniversary in 2020. Unfortunately, COVID-19 halted these plans. Thus, this holiday season, we mark Beethoven’s 251st birthday by performing two of his signature works, the Egmont Overture and the “Ode to Joy Festival”—an arrangement of the finale of his Symphony No. 9. In addition, Maestro Kidwell has programed other classical and popular holiday selections, highlighted by two Christmas songs performed by local tenor Charlie Berrios.

BEETHOVEN wrote a set of ten incidental musical numbers to accompany Johann Goethe’s play, Egmont. The subject of the play is the sixteenth century count of Egmont, a powerful politician and soldier who campaigned for the liberation of the Netherlands from Spanish control, and was as a consequence, beheaded in the Gran Place in Brussels in 1568. Egmont’s death sparked massive public protests that eventually resulted in the liberation of the Netherlands from Spain.

The message of the play stuck a strong chord with Beethoven, who was opposed to the tyranny of the French empire. His overture is a heroic piece about struggle against oppression and the eventual triumph of liberty. It begins with a short slow and somber introduction, which moves into a stormy minor key allegro. It is turbulent music, full of dramatic passion, ceaselessly searching without rest, and leading towards the moment of Egmont’s execution which is vividly portrayed. There is then a short mournful chorale before the key changes to the major, and the music takes on a triumphant character culminating in a blazing set of F major chords crowned by the piccolo. The music was immediately successful, and Goethe himself declared that Beethoven had expressed his intentions with “a remarkable genius.”

“An Ode to Joy Festival” by TODD PARRISH captures the highlights of the fourth movement of Beethoven’s Symphony No. 9. It features an instrumental version of the “Ode to Joy,” the familiar theme that the composer based on a poem by Johann von Schiller. By incorporating chorus and instruments in his last symphony, Beethoven developed this rendering of the “Ode to Joy” to express his glorious vision of a new world just beyond human reach.

PYOTR ILYICH TCHAIKOVSKY was the first Russian composer/conductor to make a lasting impression internationally. By the end of his long and fruitful career he had composed symphonies, concertos, operas, ballets, and chamber music—some of which are among the most popular theatrical music in the classical repertoire. The Nutcracker Suite, one of his best known works, has become, along with Handel’s Messiah, a staple of holiday fare. It was first performed in St. Petersburg on March 7, 1892 as a sneak preview for the complete ballet, an adaptation from E.T.A. Hoffman’s fairy tale, The Nutcracker and the Mouseking.

Composed of eight miniature pieces, the Suite does not include much of the music that carried the drama of the ballet’s plot, but it does present a sampling of the wonderful melodies and distinctive tone colors that characterize all the music of the larger work. It begins with an Overture, orchestrated with light strings and winds, that invites us to enter the magical world of the fairy tale. Immediately following is the March which introduces the Christmas party scene. This piece shows the full power of the orchestra with brass and percussion resounding, underpinned by pizzicato strings, a typical Tchaikovsky touch.

The remaining pieces are all second-act characteristic dances which take place in the Kingdom of the Sweets. In the Dance of the Sugarplum Fairy, the celesta, a newly invented instrument, made its first appearance with an orchestra. Trepak (Russian Dance) displays the most Russian flavor, as one can imagine the spectacular leaping of the leather-booted Cossacks. The Arabian Dance is scored mainly for the woodwinds and muted strings, though the tambourine is occasionally heard. The plaintive cry of the English horn recalls the sound of the Middle Eastern shawm (an ancient double-reed instrument) and reveals Tchaikovsky’s obsession with the exotic. The Chinese Dance echoes this exoticism with the use of the glockenspiel and the triangle. Mirlitons were musical instruments rather like “kazoos” played by children. A flute trio represents them in the Dance of the Mirlitons. Finally, the Waltz of the Flowers brings the suite to a grand conclusion with a woodwind and harp introduction followed by the horns leading the way to the dance."

One of the most beautiful of all Christmas songs, O Holy Night was written in 1847 by ADOLPHE ADAM to a text provided by his friend, the poet Placide Cappeau. Adam would go on to be a successful composer, producing 36 operas, operettas, one-act musicals, and twelve ballets. The English text for the song is a paraphrase of the original poem by the American music critic, John Sullivan Dwight, and reflects on the birth of Jesus and humanity’s redemption.

Gesù Bambino is an Italian Christmas song composed by PIETRO YON in 1917. The melody was used by Frederick H. Martins in his English language carol, “When blossoms Flowered ‘mid the Snows.” The melody and lyrics of the chorus are derived from the chorus of “Adeste Fideles” (O Come, All Ye Faithful.) As music historian Salvatore Basile has noted: “The carol has achieved the near-impossible feat of surviving in the standard holiday repertoire with important performances, innumerable recordings, and every kind of vocal and instrumental arrangement.

Cambridge-born composer and arranger LEROY ANDERSON wrote Sleigh Ride in 1946 during a long heat wave, and Mitchell Parish wrote the lyrics. This colorful piece has been a holiday favorite ever since it was first recorded in 1949. 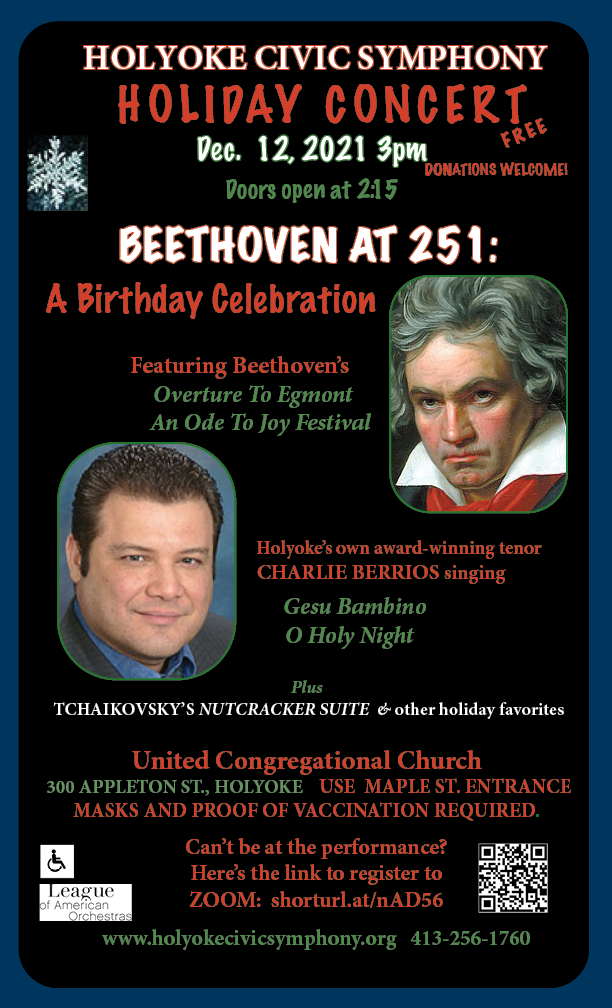