When David Kidwell became the Music Director and Conductor of the HCS in 1997, he pledged to introduce new and/or underplayed compositions into the orchestra’s repertoire. Representative of this resolve is our performance of Concert Overture No. 1 by Florence Price, the first African American woman to be recognized as a symphonic composer. In addition, Kidwell, a prodigious composer himself and an extraordinary pianist, has used these talents to highlight many of our concerts during the last twenty-five years. In celebrating his Silver Jubilee as HCS maestro, it is fitting that we play his beautiful symphonic portrait, Shenandoah, and accompany him in his brilliant performance of Gershwin’s Rhapsody in Blue.

Florence Price, a classical composer, pianist, organist and music teacher, enjoys the distinction of being the first African American woman to be recognized as a symphonic composer. Her little known but enormous output includes four symphonies, chamber works, art songs, violin sonatas, organ anthems, piano pieces, spiritual arrangements, and three piano concertos. Although she composed hundreds of pieces, her catalogue did not enter the twentieth-century mainstream canon, and many of her works, including two violin concertos, might have vanished if they had not been discovered during the 2009 renovation of her abandoned home in St. Anne, Illinois.

Price was born in Little Rock, Arkansas, one of three children in a mixed-race family. Her father was a dentist, and her mother was a music teacher who guided Florence’s early musical training. She played her first piano performance at the age of four and published her first composition when she was 11. On graduating from high school, she enrolled in the New England Conservatory, with a major in piano and organ. Light skinned, she initially identified as a Mexican to avoid the African American prejudices of the time. At the conservatory she studied composition and counterpoint with George Chadwick and Frederick Converse, graduating in 1906 with an artistic diploma in organ and a teaching certificate.

After several years of "teaching music privately and serving as the head of the Music Department at Clark Atlanta University (an historically black college), Price returned to Little Rock. She then moved on to Chicago where she continued to study composition, orchestration, and organ with the leading teachers of that city.

By the 1930s Price’s compositions had begun to achieve national recognition. In 1932 her Sonata in E Minor for piano won First Prize in the Wanamaker Music Contest, with overall honors awarded to her first symphony. When the Chicago Symphony Orchestra programmed her work in 1933, Price became the first African American woman to have a composition performed by a major U.S. orchestra.

Her undated Concert Overture No. 1 is based on the spiritual, “Sinner, Please Don’t Let This Harvest Pass.” The work demonstrates that though her training was steeped in European tradition, Price’s music is basically an American idiom with Southern roots. Being deeply religious, she incorporated elements of African American spirituals, emphasizing their rhythm and syncopation rather than just using the text, and her weaving of tradition and modernism reflected the way life of African Americans in large cities at the time. The Concert Overture No. 1 is full of surprises as the spiritual’s endearing tune folds in and out of the orchestra’s full power, sounding Wagnerian at times and then returning to that graceful quiet melody.

Shenandoah is an area of western Virginia which encompasses the Blue Ridge Mountains (part of the Appalachian chain) and the Shenandoah Valley. The name is of Native American origin, said to mean “River of High Mountains.” Various Native American tribes, which had been living in the area for thousands of years, died off or were driven out by epidemics of new diseases brought to the continent by European settlers. The mountains were repopulated in the early 1700s, and the region grew into an isolated and fiercely independent community of farmers, traders, and craftsmen. Farming the rocky and uneven mountain land was always difficult, but by the early 20th century, with the land stripped and overworked, it became nearly impossible. In addition, the Chestnut Blight and the onset of the Great Depression devastated the local economy. In 1926, the U.S. Government decided to make the area into a national park and required all landowners to sell their property. Although some families gratefully accepted such a buyout, many others refused to leave and had to be forcibly evicted.

Shenandoah National Park was established in 1936. After more than 200 years of human use (and abuse), the area’s flora and fauna rebounded quickly. Today the Park features the scenic Skyline Drive (built in the 1930s by the Civilian Conservation Corps), numerous campgrounds and tourist attractions, and a vast network of hiking trails, including a 100-mile section of the Appalachian Trail. On many trails, one may still find tombstones, fences, house foundations, and other reminders of the people who once lived in the mountains.

Shenandoah: A Symphonic Portrait is a musical depiction of both the mountains and the mountain people. (In each of the movement titles, the first word is an aspect of the mountains, the last an aspect of the people.) I have attempted to bring some of the rich tradition of mountain folk music to the piece, both by using ethnic instruments such as the fiddle, guitar, and dulcimer, and by incorporating some of the genre’s style and flavor into my own musical aesthetic. The folksong “Oh Shenandoah” is quoted in its entirety in the fourth movement, but all of the remaining melodies are original folksong emulations (which in fact were all derived by various methods from the “Oh Shenandoah” melody itself).

The first movement represents the sturdiness, stability, and constancy of the mountain people and of the mountains themselves. Movement is slow but steady, and open intervals are prominent. Harmonies are built from overlapping, or stacked, intervals of the fourth, creating a firm foundation and a modal flavor. Familiar “horn fifths” are also important, being derived directly from the overtone series – the bedrock, as it were, of Western music. Near the end of the movement, the main melody appears in the woodwinds at three different speeds simultaneously. The bitonal closing chord is an homage to Aaron Copland’s Appalachian Spring.

The second movement is in two parts. It opens with a simple melody, played by a solo violin and guitar, reminiscent of a campfire song. The rest of the first section is a set of variations on that melody, gradually building in power, then eventually returning to the original instrumentation. The second section is a depiction of a country hoedown. After a brief transitional section which simulates the tuning of fiddles, two episodes are presented, both in the traditional 16-bar AABA form, and both sharing a common refrain. The third episode, in minor, closely resembles an Irish jig, one of the many ancestors of Appalachian folk music. After a reorchestrated return of the first episode, there follow two “breaks,” one for solo violin and one for the bass section. The first two episodes then return in reverse order at a breakdown (faster) tempo, and the movement closes with two codas. All of the material in the hoedown section is derived from the opening campfire song, which is in turn derived from “Oh Shenandoah.”

The third movement features the interplay of two different ideas. The first is the haunting melody played at the beginning by the dulcimer. This theme returns twice more in the movement and is later intertwined with fragments of “Oh Shenandoah.” The second idea is an original hymn tune, which one might imagine being sung in a tiny white-frame mountain church. Two fragments of the hymn are played by the woodwinds, each time in a key foreign to the strings in the background, creating an eerie feeling of frozen time. The hymn is eventually played in its entirety by a string quartet, and the movement ends bitonally with an Amen in the strings and fragments of the modal melody in the winds.

The fourth movement, “Rebirth and Remembrance,” opens immediately with the “Oh Shenandoah” melody played by a solo cello without accompaniment. A set of variations follows in which the solo becomes a trio, then a three-part canon (round), then a powerful statement for the full orchestra. The “remembrance” aspect is accomplished through intervening contrasting episodes based on material from each of the preceding three movements. After gradually receding into a quiet restatement of the very beginning of the piece, the movement quickly builds again to a majestic multi-layered conclusion.

George Gershwin was an American pianist and composer whose compositions panned both popular and classical genres. Born in1898, he grew up in the New York City tenements and at age ten began playing the piano following the example of his older brother Ira. dIn 1913, he let school at the age of 15 and began writing songs on New York City’s Tin Pan Alley. In 1919 he scored a big national hit with his song “Swanee,” but his first major concert work, Rhapsody in Blue for orchestra and piano, did not premiere until 1924. Commissioned by Paul Whiteman, Gershwin composed the concerto in five short weeks. He performed it on the piano publicly for the first time on February 12 at the Aeolian Hall in New York City with Paul Whiteman’s concert band playing the orchestration written by Ferde Grofé.

Rhapsody in Blue is one of the most recognizable pieces of American classical music. It combines jazz influences, improvisation, and classical structure into a joyful musical expression. From its instantly recognizable opening whine by the clarinet through its brilliant finale, it epitomizes the Gershwin sound and instantly transformed the 25-year old songwriter into a composer of “serious music” who would go on to write such standards as “Fascinating Rhythm” and “Lady be Good” as well as the groundbreaking opera Porgy and Bess. 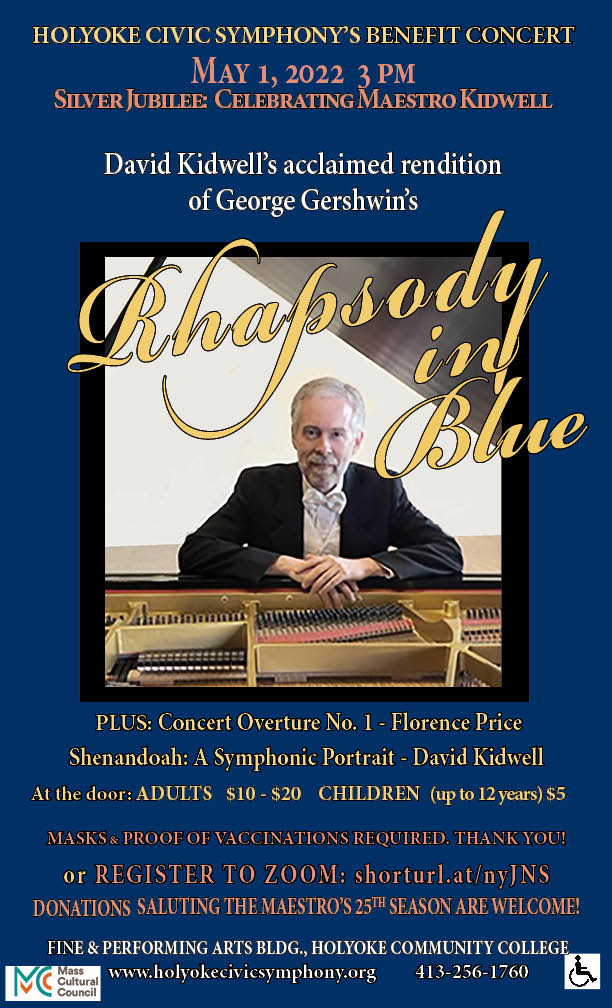