We’re Back! A Long-Awaited Celebration

The 55th season of the Holyoke Civic Symphony takes place within a world still observing pandemic precautions. Although this situation eliminates the possibility of presenting our entire orchestra in concert this October, it does open up the exciting possibility of highlighting the various instrumental sections that make up the orchestra. Today we feature two pieces performed by brass, two by strings, and one by a wind ensemble. A special highlight will be a guest soloist, soprano Mary Annarella, who, accompanied by strings, will sing in Portuguese Villa-Lobos’ beautiful Bachianas Brasileiras No. 5.

DENNIS EVELAND is a retired Band Director with 35 years of experience. He composed Brass Celebration No. 1 for the Robstown High School Brass choir. The piece is scored for three B-flat trumpets, horn in F, two trombones, euphonium, and tuba.

BRIAN SADLER (b. 1982) is a Musician First Class and trombonist/arranger in the U.S. Navy Fleet Bands. During his 15 years of naval service, he has composed and arranged more than 100 pieces for band, brass ensemble, and woodwind quintet. His Action Brass, written for brass octet (3 B-flat trumpets, 3 trombones, bass trombone, and tuba), was the winner of the Excellence in Composition Award at the 2008 International Brass Music Festival.

HEITOR VILLA-LOBOS (1887-1959) was a Brazilian composer and conductor who achieved during his long career the highest international fame of all Latin American musicians. Extremely prolific, he wrote in practically all musical genres, and his entire production includes more than 1,000 items. Among the most intriguing of his works is the Bachianas Brasileiras, a series of nine pieces composed between 1930 and 1945 as an homage to J. S. Bach. Villa-Lobos believed that Brazilian folk and popular music contained elements similar to some of Bach’s contrapuntal and rhythmic procedures, and he intended the Bachianas to be an adaptation of certain Baroque techniques to Brazilian musical materials.

Written in 1938, the Bachianas No. 5 features a lyrical modina-like “Aria” (a sentimental love song) with an improvisatory feeling typical of Brazilian music. Villa-Lobos scored the piece for eight cellos and soprano, but we play today an arrangement for strings by American composer John Krance. The wordless vocalized melody of the opening has become the most celebrated passage of all time in Brazilian music, and its simple beauty and heart-rending romanticism have an appeal which transcends period and nationality. The central section sets in declamation the words (listed in English below) of a poem, Nocturne, by poet and singer Ruth Valadares Correa, who also gave the movement’s first performance in 1939. The words of the poem in English are as follows:

Lo, at midnight clouds are slowly passing, rosy and lustrous
O’er the spacious heav’n with loveliness laden,
From the boundless deep the moon arises wondrous,
Now she adorns herself in half unconscious duty.
Eager, anxious that we recognize her beauty,
While sky and earth, yea all nature with applause salute her.
All the birds have ceased their sad and mournful complaining,
Now appears on the sea in a silver reflection
Moonlight softly waking the soul and constraining
Hearts to cruel tears and bitter dejection.
Lo, at midnight clouds are slowing passing rosy and lustrous,
O’er the spacious heavens dreamily wondrous.

Denmark’s most famous composer, EDVARD GRIEG (1843-1907), wrote the Holberg Suite in 1884 to celebrate the 200th anniversary of the birth of the Dano-Norwegian poet-dramatist Ludvig Holberg (1684-1754). Originally written for piano, he later adapted it for string orchestra. The suite consists of a Preludium introduction followed by a set of four dances: Sarabande (a slow, stately dance in 3/4 time); Gavotte (a gracious, moderate tempo dance), Air (an elegiac song), and Rigaudon (a French dance with a cheerful, vivacious character). The Suite, an early essay in neoclassicism, eventually became one of Grieg most beloved works.

Born in Switzerland, JOACHIM RAFF (1822-1882) showed great natural talent as a pianist, violinist, and organist, and he taught himself the rudiments of harmony and composition. While living in poverty in Zurich, he walked 80 kilometers to hear the famous Franz Liszt play. Eventually he became Liszt’ssecretary and copyist, while he continued to promote his own music. He scored the Sinfonietta, (a word he coined himself) for pairs of flutes, oboes, clarinets, bassoons, and French horns, clearly intending it to be something greater than the wind serenades popular at the time.

Published in 1874, the work consists of four movements: Allegro, Allegro molto, Larghetto, and Vivace. Over time, the Sinfonietta’s popularity has endured. It is one of the works which has continued to keep Raff’s name before audiences, long after most of his music was forgotten. 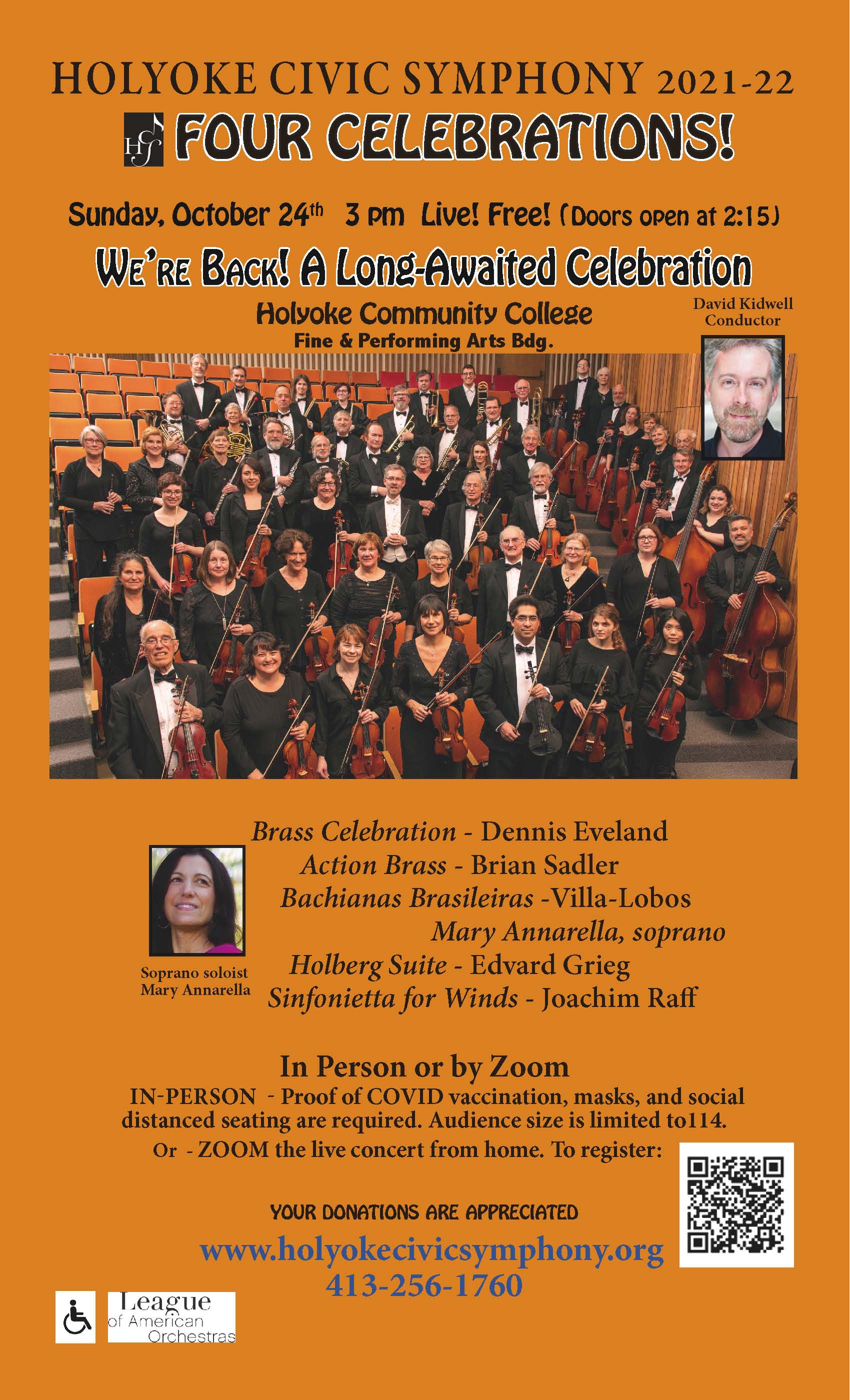 Listen to the Concert:
We’re Back! A Long-Awaited Celebration