“Feliz Navidad.” “Joyeux Noël.” “Fröhliche Weihhachten.” “Merry Christmas.” Every December, people of virtually all cultures take a moment or two to offer a simple seasonal greeting of joy and peace. The HCS welcomes this opportunity to perform a concert that combines two popular classics and a selection of wonderful holiday music.

Georges Bizet was a French composer of the Romantic era who is best known for his operas in a career cut short by his early death from a heart attack at age 36. He achieved few successes before his final work, Carmen, which has become one of the most frequently performed works in the entire opera repertoire. As it was common practice in the nineteenth century for composers to produce orchestral suites from their operas as a way to promote their music in concert halls, Bizet created two suites from his Carmen score.

The three selections that we will play today form part of the Carmen Suite No. 2. “Chanson du Toréador” is the famous Toreador’s song sung by Escamillo when he arrives in Seville ahead of the bullfight. A trumpet represents the voice of the brash, bombastic Escamillo, and the music is tense, dramatic. Full of Spanish flair, it describes various situations in the bullfight, the cheering of the crowds, and the fame that comes with victory. “La Garde Montante” is a march sung by urchins who accompany a troop of fresh soldiers arriving to take over guard duties in the square outside the cigarette factory where Carmen is employed. The “Danse Bohème” occurs while Carmen and her friends are entertaining the officers at the local inn.

Opening with a rousing flute duet, the music slowly builds in tempo and dynamics to provide a thrilling finale to the second suite.

Wolfgang Amadeus Mozart, at some point between the end of September and mid-November 1791, wrote a concerto for the clarinetist Anton Stadler, who soon after presented its first performance in Vienna. The concerto was to be the composer’s last major instrumental piece, for he died two months later at age 35.

Mozart was fond of the clarinet with its rich sonorities and almost vocal qualities of expression. A certain chamber music quality reigns over the entire concerto. The trumpets and timpani of his most brilliant piano concertos are omitted here, and even oboes, the most penetrating of the woodwinds, are banished. The string writing is sophisticated, with Mozart making meticulous distinctions in dividing the bass line between cellos and double basses.

The concerto has three movements: Allegro, Adagio, and Rondo: Allegro. The Allegro begins with an orchestral introduction that presents the graceful main theme. When the clarinet enters, it plays its own version of the main theme and introduces several new ones, passing through a rich succession of keys. Throughout, Mozart fully exploits the different sonorities of the clarinet from the clear, pure high notes to the warm middle register and the chesty lower range. The soloist’s forays into darker minor tonalities add expressive complexity to the music’s elegant beauty.

The slow Adagio is a marvel of artful simplicity; its undisturbed serene beauty makes it one of Mozart’s loveliest creations. The movement begins with a long melody introduced by the clarinet and then echoed by the orchestra. A central section focuses completely on the soloist, whose part includes more ornamental figuration. The opening melody then returns in abbreviated form, followed by a coda.

The fast and playful Rondo: Allegro takes the form of a rondo, in which the main melody alternates with contrasting episodes. After the soloist and orchestra introduce the jaunty main theme, the clarinet launches into a sweet, complimentary second theme becoming increasingly expressive and developmental as it unfolds. The main theme then makes a brief return, leading to a contrasting episode in a minor key. Then it reappears once again for the concerto’s joyful conclusion.

José Feliciano was born in Lares, Puerto Rico in 1945 and started playing the ukulele at age 3. After his family moved to New York, he learned to play classical guitar, inspired by Andres Segovia, and eventually he became a singer-songwriter. Over 50 years ago, in 1970, he introduced “Feliz Navidad.” The song consists of a simple Spanish chorus (the traditional Christmas/New Year greeting, “Feliz Navidad, próspero año nuevo y felicidad” meaning “Merry Christmas, a prosperous year and happiness”) and an equally simple English verse, “I wanna wish you a Merry Christmas from the bottom of my heart.” These two phrases of holiday cheer, repeated over and over in Spanish and in English for three minutes, have a kind of charm so that anyone can sing. “Feliz Navidad” has become a classic Christmas pop song in the United States, throughout the Spanish-speaking world, and internationally.

Brian Balmages is an American composer, conductor, and music educator. He wrote Fantasia on We Three Kings as a serious concert piece for the holiday season. Some musicians, however, who have performed the work decided that the best description for it is “Star Trek meets a Christmas carol medley!” The melody is introduced in fragments over a haunting orchestration. After a short pause, the entire melody is presented by the oboe which is later joined by the rest of the woodwinds and strings. A second carol, “What Child is This?” is introduced briefly, and then emerges into a brilliant countermelody. The piece builds in volume and intensity to drive toward a powerful and climatic ending.

Florence Price, a classical composer, pianist, organist, and music teacher, enjoys the distinction of being the first African American woman to be recognized as a symphonic composer. Her little known but enormous output includes four symphonies, chamber works, art songs, violin sonatas, organ anthems, piano pieces, spiritual arrangements, and three piano concertos. Although she composed hundreds of pieces, her catalogue did not enter the twentieth-century mainstream canon, and many of her works, including two violin concertos, might have vanished if they had not been discovered during the 2009 renovation of her abandoned home in St. Anne, Illinois. Now in the last ten years major orchestras are beginning to program her music.

Adoration published in 1951 was originally composed for the organ. As arranged by Robert Jones, the piece unfolds leisurely in a literal ABA form with coda, the middle section being somewhat slower.

As with most of her compositions, the musical vocabulary is lushly romantic and tonal. In the original organ version, the beautiful song-like melody - underpinned by sustained chords and long pedal points – transfers idiomatically to the arrangement for small orchestra that we hear in today’s performance.

Lauren Bernofsky has composed solo, chamber, and choral music as well as larger-scale works for orchestra, opera, and ballet. In “We Wish You a Klezmer Christmas” she has set four popular Christmas melodies in distinct and characteristic Klezmer (an instrumental music tradition of Ashkenazi Jews) styles. Opening with “Jingle Bells” over a slow and dramatic Doina, the music moves into a lively version of “We Wish You a Merry Christmas” as a Bulgar. A Khosidl is the setting for a slower, restrained version of “Hark! The Herald Angels Sing” (complete with “shout chorus”). The music takes off with “Deck the Halls” presented as a Sher. Of course, the Dreidel Song makes a cameo appearance at the end.

Leroy Anderson composed Sleigh Ride in 1946 while enduring a long heat wave. Mitchell Parish wrote the lyrics that tell of a person who would like to share a sleigh ride on a winter’s day with another person. This colorful piece, a popular favorite ever since it was first recorded in 1949, provides a festive and traditional ending for our holiday concert. 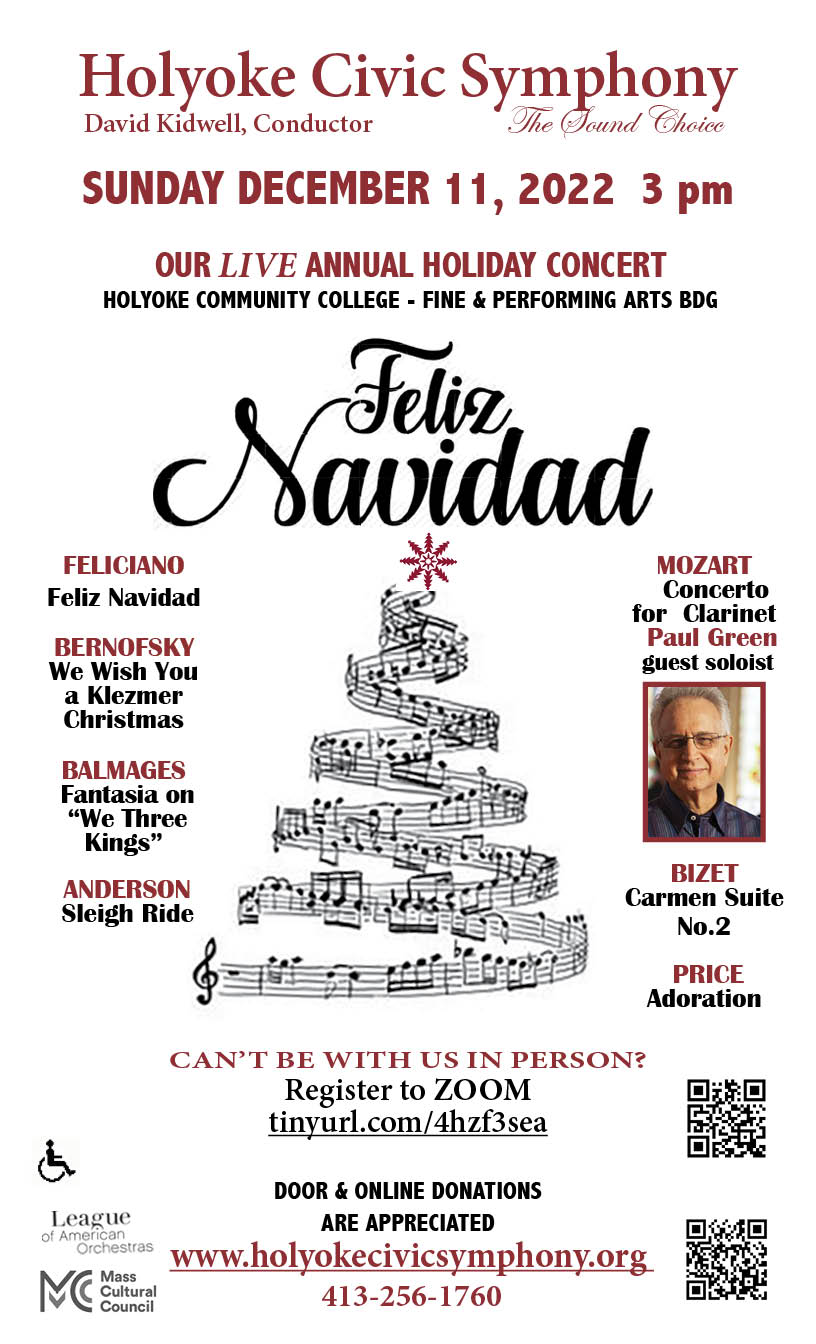 Listen to the Concert:
Feliz Navidad!
Due a technical glitch, this is only the concert's second half – with great music and not-to-be-missed repartee between Conductor Kidwell and Santa!