Composers born in the Scandinavian nations of Norway, Sweden, Denmark, Finland, and Iceland were relative newcomers to the Classical European art scene, but since World War II their works have become increasingly prominent in orchestra programs as well as in popular music. Today we celebrate four of the best-known musicians whose compositions have become familiar to audiences around the world.

CARL AUGUST NIELSEN was a Danish composer, conductor, and violinist who is widely recognized as his country’s most prominent composer. Brought up by poor yet musically talents parents, Nielsen demonstrated his musical abilities at an early age and initially played in a military band before attending the Royal Danish Academy of Music in Copenhagen from 1884 until December 1886. Inspired by composers such as Brahms and Grieg, Nielsen soon developed his own style, producing six symphonies, a wind quintet, and concertos for violin, flute, and clarinet.

Composed between 1905 and 1906, Maskarade was Nielsen’s second opera. He based it on a 1724 play of the same name written by Ludvig Holberg that is set in Copenhagen. It is a story of love and mistaken identity that unfolds with a series of glittering masked balls as its backdrop. Clothed in brilliant, inventive orchestration, the punchy melodies of the overture sparkle with wit and humor that immediately draw listeners into an atmosphere of high spirits and romantic intrigue. Although the opera is rarely heard outside of Denmark, the Maskarade overture is performed frequently and stands as one of the composer’s most widely circulated works in Europe and North America.

JEAN SIBELIUS, the celebrated Finnish composer, was born in 1865 in Hämenlinna, a small town in the south of Finland where the language and culture of his middle-class family was Swedish. It was at school that Sibelius first learned Finnish (which remained his second language), and he developed an interest in the early legends of his country, which at the time was an autonomous grand duchy under the Tsar of Russia. As a youth, Sibelius aspired to be a concert violinist, but while a student at the Helsinki music school from 1885-1889, he realized that his true gift lay in composition.

Romantic nationalism soon became the crucial element in his art and political leanings. Disturbed by the repressive measures imposed on Finland by Russian Tsar Nicholas II, Sibelius became passionate about the fate of Karelia, a region in Finland’s eastern tip that partly lay in Russia, but was said to be the home of the oldest, most respected aspects of Finish culture. When students of Helsinki University in Vyborg approached him, Sibelius accepted a commission to provide a symphonic poem for a patriotic historical pageant they were planning to hold in 1893. The eleven incidental pieces he composed aroused such nationalistic feeling that Sibelius recalled in a letter, “You couldn’t hear a single note of the of the music—everyone was on their feet cheering and clapping.”

To form the Karelia Suite, Sibelius selected three of these pieces: Intermezzo, Ballade, and Alla Marcia. The work premiered in 1896, and with its Finnish folk motifs ringing of nationalism, it instantly became one of his most popular compositions.

Finlandia, which Sibelius composed in 1899, marked the turning point in his rise to popularity, for after 1900, his music became famous around the world. He wrote the piece in support of a public demonstration in Helsinki during a time of heightened political tensions. As Russia’s hold on Finland was tightening, Sibelius’ brief but stirring composition called Finland Awakes struck home like a thunderbolt. Sibelius changed the title to Finlandia when he revised it a year later as a free-standing tone poem. The Helsinki Philharmonic programmed Finlandia on its first major tour, carrying Sibelius’ name throughout Europe. The work inspired national pride and brought Sibelius personal fame. Finlandia is effective because it is richly scored and boasts one of music’s great melodies, although, as in Elgar’s most famous Pomp and Circumstance march, it comes at the very last minute, sometimes catching audiences by surprise.

FRANZ ADOLPH BERWALD was a Swedish Romantic composer. Born in Stockholm, he came from a family of four generations of musicians. His father, a violinist in the Royal Opera Orchestra, taught Franz the violin from an early age and he soon began playing in the court orchestra and the opera. He began composing in 1818, but critics were not impressed with his works. When his father died in 1825, he was forced to make his living by starting an orthopedic and physiotherapy clinic in Berlin. Undaunted by the lukewarm reception of his music, Berwald continued composing until his death in 1868, producing six symphonies, four piano trios, tone poems, and a variety of vocal works. Not until 1866 were his musical efforts recognized, when he received the Swedish Order of the Polar Star.

Berwald’s three-act tragic opera, Estrella de Soria, first performed by the Royal Swedish Opera on April 9, 1862, never achieved a place in the standard repertory, but its overture became his best-known work. The slow, dark introduction leads into a turbulent allegro. Various folk themes enter and are varied until the calm coda which heralds the beginning of the opera proper.

EDVARD HAGERUP GRIEG, a Norwegian composer and pianist, is widely considered one of the principal Romantic Era composers. His use and development of Norwegian folk music brought the music of Norway to international consciousness, as well as contributing to developing the Norwegian national identity. Raised in a musical family, Grieg enrolled in the piano department of Leipzig Conservatory at the age of 15. In 1862 he made his debut as a concert pianist in Karlshamn, Sweden. Grieg suffered from several serious diseases including pleurisy and tuberculosis, but he maintained a robust, musical career, writing sonatas for piano, violin, cello, and a variety of orchestral works, in addition to meeting Franz Liszt, Tchaikovsky, and other leading composers of the time.

Grieg composed Peer Gynt in 1875 as incidental music to Henrik Ibsen’s play of the same name. From this music he later created two suites, each with four movements. In Ibsen’s play, Peer Gynt, the only son of Norwegian peasants, suffers from a fantastic imagination as well as delusions of grandeur. He commits mad pranks, journeys to foreign continents, and after a strange turn, survives a shipwreck to return home as a penniless old man. The movements in Suite No. 1 depict some of these adventures. The first movement, “Morning Mood,” describes the sun rising over the desert in North Africa, with the melody played by a flute flowing over mooring bass notes. The second movement, “The Death of Aase,” performed by muted strings, describes the demise of Peer’s mother and his fantasy of riding with her to the gates of St. Peter. In the third movement, “Anitra’s Dance,” Peer is back in Africa where Anitra, his host’s daughter, tries to seduce him. In the final movement, “In the Hall of the Mountain King,” Peer falls into an underground hall that is home to trolls, goblins, gnomes, and other such creatures. This movement is one of the most familiar and well-known of Greig’s pieces, since it forms part of the score for the Disney movie, Fantasia. 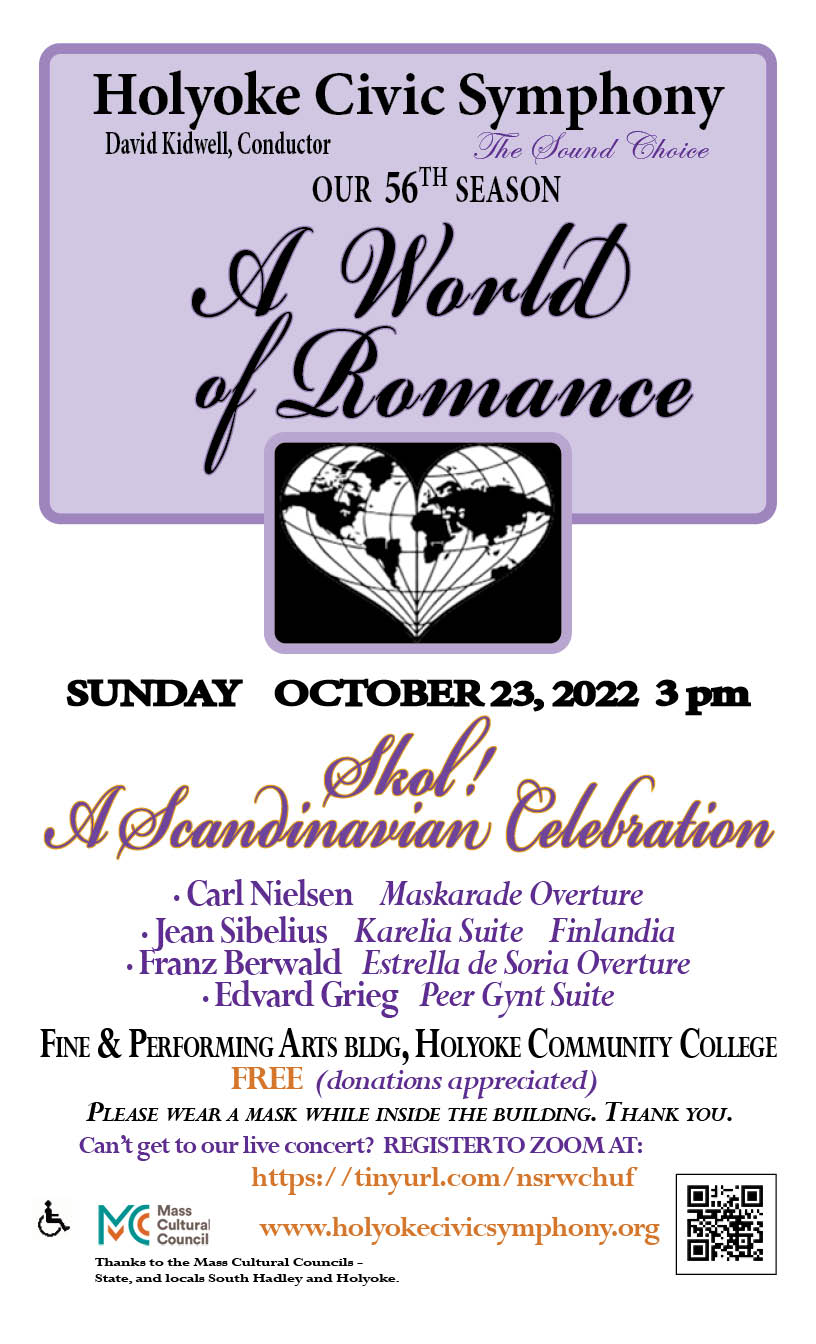 Listen to the Concert:
Skol! A Scandinavian Celebration